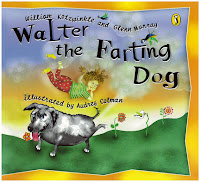 Walter the Farting Dog is one beleaguered pooch who has had his ups and downs. William Kotzwinkle and Glenn Murray's book rose to the top of the New York Times bestseller list, at the same time that tight-assed critics were refusing to carry it in bookstores and libraries, or dismissing it as worthless "poop fiction." Based on a true story, it took the authors eleven years to find a "willing publisher." Walter was once (in one of several sequels) banned from the beach, but I bet he never thought he'd be banned from the library as well. Or even worse be held responsible for getting a fledgling teacher and aspiring librarian fired from her job. Which is exactly what happened in 2004 in Broome County, after this teacher had the temerity to present the popular title for "reluctant readers" as part of a book talk to her fellow educators. Such a reckless act sparked outrage from a coworker in the kindergarten, who along with the other local church ladies proceeded to raise a big stink. Amid some loose talk about the so-called "F word," librarian and book were soon out on the street. (Something smelled in upstate New York that day, and it wasn't just Walter. A friend says you could write a children's book about the entire incident: Farting in Such Sweet Sorrow, or, The Great Whitney Point Gas Crisis.) If you have passed so far on this olfactory ode to "everyone who's ever felt misjudged or misunderstood," it's may be time to rectify that. In a piquant comparison to the 1956 children's classic Harry the Dirty Dog, John Sutherland writes in the New Statesman that Walter "is to Harry as Portnoy was to sexually uptight Holden Caulfield—dirtier." Clean up the dogs in your own catalogs by rounding up all the slightly flawed Walters you can find and giving them good, well-spelled homes. There were six in OhioLINK, and 91 in WorldCat. (Watler* alone gets a dozen hits in the former and 168 in the latter, some of which could be correct, of course, so please check.) And let's all support intellectual freedom in any way we can. (Whew, that feels better!)

P.S. Don't forget: "He who farts in church sits in his own pew." (A couple cases of windy wordplay here come courtesy of our censored librarian.)