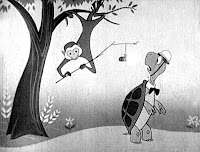 In the first Simpsons episode of 2013, called "Homer Goes to Prep School," our panicky protagonist pontificates: "Marge, the Apocalypse is coming... Maybe not tomorrow. Maybe never. But it's coming. And soon." After joining a local survivalist group, Homer starts moving provisions from the kitchen to the basement. Predictably, he leaves the rice cakes sitting forlornly in the cupboard, while making sure to move the "butter brush" down to the bunker. I don't know how prepared you are for Doomsday, but if you're anything like a lot of us, you're probably not even caught up with your nudiustertian—"of or relating to the day before yesterday"—to do list yet. (How's that for wedging in a weird Anu Garg word of the day there?) Happily, numerous past predictions of humanity's demise (including the Mayan downer from a couple of weeks ago) have failed to hit their mark. As Mark Twain might have said, reports of our death have been greatly exaggerated. Twain further advises: "Never put off until tomorrow what you can do the day after tomorrow." Prepare yourself to (eventually) correct our typo for the day, which was found 27 times in OhioLINK, and 391 times in WorldCat.

(Frame for the 1951 educational short film warning children of the dangers of nuclear war and demonstrating how to "duck and cover" in the event of an emergency, from Wikimedia Commons.)