Russel + Russell (for Russell or Russel) 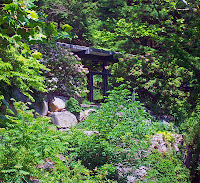 I recently saw Russell Shorto—author of The Island at the Center of the World and the forthcoming Amsterdam: A History of the World's Most Liberal City—give a talk at the New York State Museum in Albany, a place that was once known as "New Netherland." Island recounts the story of 17th-century Manhattan under Dutch rule (then called "New Amsterdam") and Russell Shorto did his research at the New York State Library, where he is Senior Research Scholar in Residence for 2013. Another Russel (let's call him "Mr. Wright") also arrived at the museum last month in the form of a new exhibition. "Russel Wright: The Nature of Design" depicts the life and work of a man whose famous estate in Garrison, New York, I was able to visit several years ago. Manitoga, as Wright named this fascinating confluence of evolution and intelligent design, consists of 75 acres of forested land and was once the site of a rock quarry, which he later transformed into a swimming pond. (He even had big boulders brought in occasionally to dot the landscape where they seemingly had been forgotten or misplaced.) In 1950, Russel and his wife, Mary, published the bestselling book Guide to Easier Living. After Mary's untimely death two years later, when their adopted daughter, Annie, was just two years old, Wright built a house and studio at Manitoga and moved there permanently. Mary had been a sculptor and together with her husband had formed the company Wright Accessories. Russel Wright Studios continues to produce household items marrying beauty and simplicity, often echoing the patterns of nature. Russel Wright merged the inner and the outer in a sort of architectural alchemy; Wikipedia describes Manitoga as "an eco-sensitive Modernist home and studio called Dragon Rock surrounded by extensive woodland gardens." Two things I remember vividly about taking the tour: 1) the house is built right into a rock ledge and has a tree growing up through the living room floor serving wonderfully as a table; and 2) the bathtub is set alongside a large picture window that looks out onto a tumbling waterfall. (Talk about your island at the center of the world!) One of our honored guests today spells his name with two L's, the other one with one. There were 518 hits in OhioLINK on Russel + Russell, and "too many records found for your search" in WorldCat. While some of these may prove to be false positives (two separate people), others are certainly not. So rustle up any you can find in your own catalogs and be sure to check the originals when in doubt.