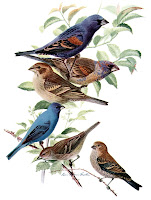 My friend is one of those early-to-bed early-to-rise types, and while I don't know about wealthy or wise, the practice seems to be making him pretty healthy. He rides his bike around town for an hour or so at the break of dawn and claims he's never felt better. The other morning he remarked to me that the Jewish day begins in the evening, "upon the third star appearing in the sky," and added that he likes to think the secular day begins in the morning, "when the third bird sings." Which is rather a lovely conceit, don't you think?

The third bird starts the day,
Before the sun has shone a ray,
And other birds all puff their breasts,
And little ones stir in their nests,
From north and south and east and west,
Awaking from their avian rest,
So happy that it soon is spring,
And morning now is on the wing.

The third bird begins the day,
A final tweet before the fray,
While folks get coffee, washed, and dressed,
And curse at times, although they're blessed
To live among these tiny guests,
Whose love of life their song attests,
For every day's a charming thing
Whene'er the third bird starts to sing.

Today's typo has been blogged before, but it's worth bringing up again as it currently garners 45 hits in OhioLINK, and 808 in WorldCat.