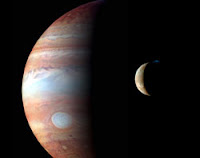 Astromony, a medium probability typo on the Ballard List, sounds a bit like how a young child might pronounce Astronomy…but by the time NASA’s New Horizons mission reaches Pluto, that child would be well on his way to being a preteen, and spelling and pronouncing the word properly (we hope).

On January 19, 2006, the unmanned NASA probe was launched toward Pluto. It will take approximately 9 ½ years to reach the former planet, arriving in July 2015 after a 3 billion mile journey.

The current whereabouts of the New Horizons spacecraft can be tracked online. As of this posting, it has currently passed beyond Saturn’s orbit, but has not yet reached Uranus. The photo accompanying this post shows Jupiter, taken on the New Horizons’ flyby in 2007.

Here's a bit of trivia: on Pluto, you would weigh only 7% of your weight here on Earth.

(Photo of Jupiter from NASA's New Horizons mission page.)
Posted by librarytypos at 5:00 AM