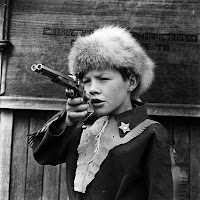 Despite the fact that David Stern Crockett avoided using the name" Davy" during his relatively short lifetime as a "pilgrim, mountaineer, soldier, bear-hunter, congressman, and defender of the Alamo" (as he's described in the subtitle to the book David Crockett, Scout by Charles Fletcher Allen), catalogers and the public at large have largely embraced it: a search in NACO on Crockett, David, 1786-1836 tells us to see Davy. We get nine returns in OhioLINK on Davy + Davey (eight are clear inconsistencies) and ten direct hits on Davey Crockett (though some of these errors may well appear on the originals). Watch out for Davey Crockett the baseball player, who throws us a curveball with the somewhat wavier spelling of his own name. How many ears does Davy Crockett have? (Answer: Three. A right ear, a left ear, and a wild front ear.) This riddle has proved popular among coworkers and rowdy young relatives alike. Ears lookin' at you, kid!

Carol Reid
Posted by librarytypos at 4:00 AM