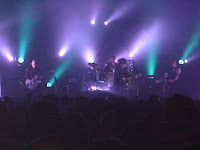 Occure* is found a fantastic 412 times in OhioLINK, making it a typo of "highest probability" several times over. (The following variations were also discovered there: Ocurrence* eight times, Ocurring seven times, and Ocurred twice.) It's important to realize, though that this is a very common spelling error and thus more likely to have occurred on the original than might otherwise be the case. So be sure to check the title page in question if the "typo" occurs in a transcribed field. (In fact, not one of these occurrences were in subject fields.) When this search is coupled with the word sic, only eight examples are found, but that doesn't mean that all publisher misprints were caught by the cataloger. As Hippocrates once advised: before effecting a cure, "first do no harm."

(Shot of the Cure doing no harm during a 2008 performance in Prague, from Wikimedia Commons.)