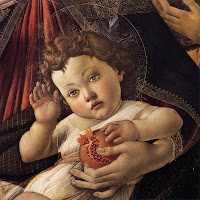 Pomegranate, according to my friend at the local food co-op in charge of overseeing the making of produce signs, is a difficult word for most people to spell. There were three cases of Pomagr* in OhioLINK, all references to California publishing houses, and one Pommegranate, with two M's. (That one almost looks right to me, maybe since the fruit is so symmetrical and full of yummy seeds. Or perhaps because pomme means apple in French.) Although most alternative spellings for the word pomegranate are clearly typos, historically its spelling has not been carved in stone. (In fact, we only found one that actually contained any "granite": Pomegranite Communications in Petaluma.) A search on Pomg* yielded one instance of pomgranate (A Golden Bell, and a Pomgranate, 1625) and one of pomgranet (The Spanish-English Rose, or, The English-Spanish Pomgranet, 1622). These are documented variants, according to the Oxford English Dictionary, but you should always check the work itself before changing such spellings or adding the gloss [sic] or [i.e.].

(Madonna of the Pomegranate by Sandro Botticelli, 1487, from Wikimedia Commons.)