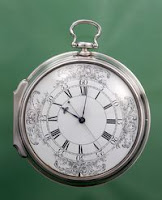 The Granada Film/A&E mini-series Longitude portrays the life of John Harrison (1693-1776), a Lincolnshire craftsman who devoted his life to the creation of a marine chronometer for accurately calculating longitude (east-west position) at sea. Without such knowledge, navigation on long-distance voyages was a risky business indeed, and at the time, sailors had to rely on tables of the moon’s position relative to the stars.

In 1714, the British government established a top prize of £20,000 for the person who could solve the longitude problem. Harrison, a man with little formal education, encountered stiff opposition from the well-heeled scientific establishment, but after much travail, he finally succeeded. Four of his timekeepers, later named H1-H4, are today housed at the Royal Observatory, Greenwich. During the last century, they were painstakingly restored by Rupert Gould, whose life provides parallel drama in the mini-series.

Logitud* appears 11 times in OhioLINK, making it a typo of moderate probability. A couple entries are for non-English titles, so be careful correcting such errors in your own catalog.