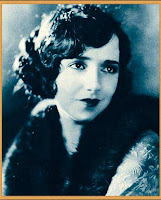 To be or to be Bebe ... that is the question. Phyllis "Bebe" Daniels could barely count to three before she knew what she wanted to be. Daniels was born in Dallas in 1901, but her family soon moved to Los Angeles, where she appeared in a touring production of Richard III at the age of four. She made her film debut at seven and when she was ten, played Dorothy Gale in The Wonderful Wizard of Oz. (Speaking of which, see last week's entry To to for something akin to our typo today.) We got 42 hits in OhioLINK on Be be, but as it turns out, only ten or so are actual errors. The rest represent personal and corporate names; lots of punctuating punctuation; and the occasional [sic] or two. As well as weird titles like "To be be-holed-in"; ambiguous ones such as "Be be your love"; cool PoMo ones like "Let Be Be Finale of Seem"; and ones so wordy that two be's are almost bound to meet, as in: "The Scotch wedding, or, A short and pretty way of wooing: when as complexions do agree, and all things they are fitting, why should the time prolonged be, be quick and mind your knitting..." Plus this bracing line from The Loves of Damon and Sappho: "You lovers all that would successful be; be not too bashful, but in love be free." But I digress. Take care of today's typo, if you dare, and then for a lark, take a look at this interactive map of Bebe Daniels' crowd circa 1921, as depicted on the cover of Vanity Fair. Daniels made over 203 movies in her lifetime, but still made time to be Bebe with her frequent costar Harold Lloyd, whom she never married but clearly loved and won numerous dancing competition cups with!

(Publicity photo of Bebe Daniels from Stars of the Photoplay, 1924, from Wikimedia Commons.)