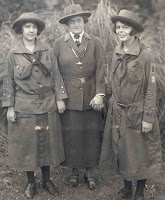 Today is Girl Scout Day, which makes it a good day to see "Daisy," the nickname of Juliette Gordon Low, the founder of the Girl Scouts. Before we break out the Thin Mints and Trefoils, though, a little background on our girl. She was born in 1860 and grew up in Savannah, Georgia, where her home still stands and is open to public view. She was reportedly always eager to learn new things and conquer new horizons. She suffered from deafness in one ear and then, after a freak rice-throwing accident at her wedding, lost her hearing in the other one as well. This may have been a bad omen as the marriage proved unsuccessful, but Juliette did not. She went on to form a close platonic relationship with Lord Robert Baden-Powell in England and based the Girl Scouts of America on Baden-Powell's Boy Scouts and the corresponding Girl Guide movement abroad. Today's typo is Grodon and it appears 13 times in OhioLINK, making it one of "moderate probability." Although the status of over half of these is unclear (there's only one iteration of the name in the record), I'd wager that all or nearly all of them are typos for Gordon. (Of course, you'll want to check the work firsthand to be sure; in some cases, the mistake may be on the original.) The beautiful, magical Girl Scout camp of my youth, Camp Little Notch in upstate New York, is currently on the chopping block, and I'm not talking about putting another log on the fire and toasting marshmallows. Former scouts throughout New York State are trying to raise enough money to buy back the land and preserve it as a camp for girls, if not an official Girl Scout camp. Daisy Low would be proud of them.