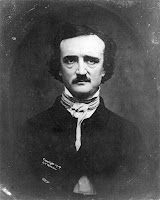 The daguerreotype was the first successful form of photography, developed in the 1830s by Louis-Jacques-Mandé Daguerre and Nicéphore Niépce. A copper plate is coated with silver iodide and exposed in a camera. Mercury vapour is used to develop it, and a salt mixture to make it permanent.

Originally, the exposure process took 3-15 minutes, making it too long to be used for commercial, portrait photography, but later bromine and chlorine were added to the process to shorten it to less than a minute.

The image shown here is a photograph of a daguerreotype of Edgar Allan Poe taken in 1848, by W.S. Hartshorn.

A common error in spelling daguerreotype is to leave out the e: daguerrotype. But if you remember that the word comes from Louis-Jacques-Mandé Daguerre's name (which has that e at the end!) it should be easy, right? As easy as remembering Daguerre's three hyphenated given names (?!) or as easy as sitting completely still for 15 minutes while your portrait is taken.