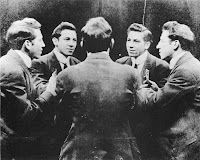 Leonard Marx was born in New York City on March 22, 1887. He was called "Chicko" (from the term "chicken chaser," i.e., ladies' man), which eventually evolved into "Chico" as the eldest Marx brother adopted the film persona of an Italian piano player. This became a bit of an inside joke. In the movie Animal Crackers, Chico's character recognizes a man impersonating an art collector and reproves him: "How did you get to be Roscoe W. Chandler?" Chandler: "How did you get to be Italian?" Chico: "Never mind—whose confession is this?" Another time, a contestant on You Bet Your Life tells the host she's from Chico, California, and Groucho, with tongue in cheek, replies that he has a brother named "Cheek-oh." Chico Marx was a talented pianist, notorious womanizer, and inveterate gambler. His famous stage name was born when the letter K got dropped; our typo for the day involves a dropped letter as well. OhioLINK yields eight cases of Leonad* for Leonard* (although two of them are for the correctly spelled Wesley Leonadis Sadler), so be sure to check-o your records carefully!

(Chico Marx playing cards with himself, taken at Rockaway Beach, New York, circa 1909, from Wikimedia Commons.)