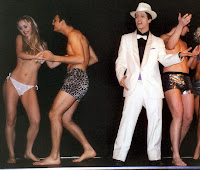 Cha-cha is short for Cha-cha-cha, and in the shot to the right, where the dancers are wearing abbreviated costumes, to say the least, I suppose it's possible that a mere cha might suffice. At any rate, it's a dance in which participants are often rated on a scale of one, two, cha cha cha. I'm not entirely sure how to rate this too-live crew, but it looks like the evening itself was a definite 10. Charater* comes in at an impressive 54 times in OhioLINK, which makes it a typo of "high probability" on the Ballard list. Check for today's typo in your own catalog and make sure the word in question contains all of its characters.

(Patrik Hont sings "Havana for a Night" along with cha-cha dancers in a Valentine's Day cabaret at the Blue Moon Bar, Stockholm, Sweden, 2003, from Wikimedia Commons.)