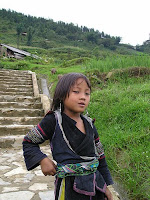 According to Wikipedia, "Moung is a khum (commune) of Moung Ruessei District in Battambang Province in northwestern Cambodia." And: "The Hmong are an Asian ethnic group from the mountainous regions of Vietnam, Laos ... Thailand [and] southern China." Lush and verdant scenery, colorful costumes, and delicious food await the weary traveler, who understands immediately that he's among friends. There were 75 hits for today's typo in the OhioLINK catalog. Note that amoung is an outdated spelling for among that appeared with some frequency up until the 1920s. Of the first 20 hits in OhioLINK, however, only five or so are on records for books published before that time.