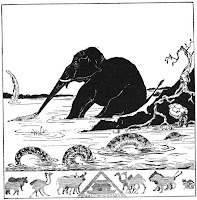 I cannot be entirely sure of this, O Best Beloved, but I almost feel as if I can trace my unabashed love for alliteration to my first reading of "The Elephant's Child" by Rudyard Kipling, a pourquois story first published in 1902. "I am going," the Elephant's Child declares one day, "to the great grey-green, greasy Limpopo River, all set about with fever-trees, to find out what the Crocodile has for dinner." While searching in OhioLINK for today's typo—which got a whopping 175 hits in OhioLINK—I had to stop and smile at one rather lengthy one, which read in part: "... on the effectiveness of the African Elephant Conversation Act ..." I am not conversant with this act, but it certainly has my wholehearted support (I'm not a conservative, after all). Still, no matter how many lawmakers sit around jawing about elephant conservation, I doubt it will ever do as much for our love of these gentle giants as that wonderful Kipling tale has done. The Elephant's Child, with his 'satiable curtiosity, chatted up nearly every single animal in the jungle, and got repeatedly spanked for it. But in the end, those conversations served him well, as did the spanking new nose he received from the Crocodile. (Please note that not all 175 records retrieved contain typos; the majority, in fact, proably don't. For example, the first one in the list is for a 1938 publication called Conservation conversation, concerning the Civilian Conservation Corps in Tompkins, New York.)

(Original woodcut illustration for the Just So story, The Elephant's Child, by Rudyard Kipling, from Wikimedia Commons.)