Runway* + Runaway* (for Runaway* or Runway*) 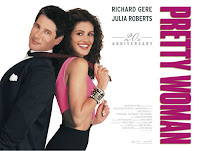 Runaways sometimes become prostitutes, but they rarely become models. Which is not to say a girl or boy couldn't be all three, and perhaps even write a runaway bestseller called From Runaway to Runway: A Whore's Horatio Alger Story. (Okay, I made that one up. My imagination is running away with me.) I found seven hits in OhioLINK on Runway* + Runaway*; however, two were for the song title "Runway Runaway" and one was for a videodisc of the 1938 movie serial about Dick Tracy: "The Runway of Death" and "The Runaway Torpedo." Such compound typo searches often yield useful results, but these generally include some legitimate word hookups, so think carefully before attempting to change either one.

(Cinema quad poster artwork for UK re-issue of Pretty Woman, from Flickr. Coincidentally, Roberts and Gere went on to costar in the 1999 movie Runaway Bride.)