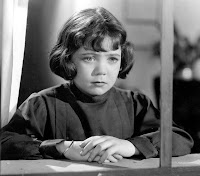 Got room for one more cutie pie? Originally groomed to be competition for Fox Studio's Shirley Temple, Sybil Jason was a talented little actress in her own right. Jason was born in 1927 in Cape Town, South Africa, where she began to play the piano at the age of two, and was doing full-blown public impersonations of Maurice Chevalier by three. Though her career with Warner Bros. was relatively brief, she continues to thrive today and is an active member of the International Al Jolson Society. (Jason co-starred with Jolson in The Singing Kid in 1936.) She never achieved the cultural status of Shirley Temple, but she did have supporting roles in The Little Princess and The Blue Bird and remained close friends with Temple her entire life.

A sibyl was one of approximately ten ancient Greek or Roman oracles; the word is now generally used to mean any female prophet. According to FreeDictionary.com: "The most famous was the Cumaean sibyl, described by Vergil in the Aeneid. When she offered Tarquin her prophetic writings, the so-called sibylline books, he refused to pay her high price. She kept burning the books until finally he bought the remaining three at the original price..." Today marks the 90th anniversary of the ratification of the 19th Amendment to the Constitution. Let's all take a moment to celebrate the 19th-century sibyls who struggled so long for women's suffrage and prophesied the rise of feminism in the coming decades. Long live the right to vote, along with the right to be cute! Sibyl* + Sybil* turns up 25 records in OhioLINK, nearly all of which predictably contain at least one typo.