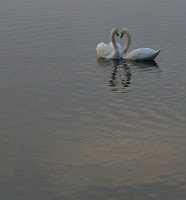 These swooning swans look as if they're about to tie the knot, but it's hard to tell which bird is the bride. Some winged creatures like to play the field, while others are more famously monogamous. In general, swans tend to mate for life, although "divorce" is not unknown among the Ugly Duckling crowd. In any case, they do look rather bridal, being all swan-necked and dressed in white, whereas another LTR species, the penguin, looks very much like a tuxedoed groom. For the sake of faithfulness, I suppose it doesn't hurt that they're "flightless." (Actually, swans are only earthbound for a month or so each year during molting season; penguins, on the other hand, are thoroughly pedestrian.) We found nine examples of Brids in the OhioLINK database, about half of which were for the birds. These included two instances of Brides (as in St. Bride's Church, London) and two where Brids was a personal surname. There were also over 100 hits in WorldCat. If you get too many in your own search for today's typo, try pairing it with Birds. Going this route, we ended up with three in OhioLINK and 32 in WorldCat.

("Lovebirds—two swans (of many in the vicinity) get up close and personal," by Steve Partridge, 2007, from Wikimedia Commons.)