Robins + Robbins (for Robbins or Robins) 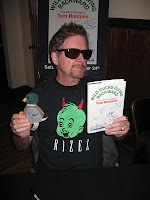 Baskin-Robbins has 31 flavors* and author Tom Robbins has nine novels (plus numerous essays, short stories, and a 2005 collection of such things). His first book was Another Roadside Attraction (1971) and his latest one is called B Is for Beer (2009). Perhaps his most popular work was Even Cowgirls Get the Blues, which was made into a film by his good friend Gus Van Sant in 1993. Today is Tom's birthday; he was born in Blowing Rock (great name!), North Carolina, in 1936. According to Michael Dare, this is how Tom writes: "When he starts a novel, it works like this. First he writes a sentence. Then he rewrites it again and again, examining each word, making sure of its perfection, finely honing each phrase until it reverberates with the subtle texture of the infinite. Sometimes it takes hours. Sometimes an entire day is devoted to one sentence, which gets marked on and expanded upon in every possible direction until he is satisfied. Then, and only then, does he add a period." Without working too hard, we found 60 cases of today's typo in OhioLINK and 474 in WorldCat. While some of these are bound to be false hits (both terms correct in context), the majority would appear to be genuine typos.