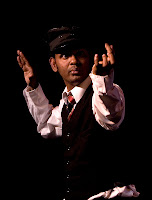 The Little Engine that could probably couldn't had he been drinking that day. And it's probably best if the engineers stay sober as well. There's even a push right now to ban alcohol consumption on the part of some European train travelers. But rather than getting drunk in order to watch the passing scenery, how much better it would be to watch the intoxicating Ramesh Meyyappan chew up the scenery (in a good way) in one of his highly acclaimed performances in cities all over the world. Meyyappan is a Glasgow-based Singaporean and "multi-faceted theatre practitioner who creates performances using an eclectic mix of visual and physical theatre styles." His 2007 production Gin & Tonic & Passing Trains is based on Charles Dickens’ classic ghost story "The Signalman" and garnered the following review from Singapore's The Flying Inkpot: "Sublime storytelling, pure and simple. Meyyappan out-Dickenses Dickens... Cheeky, magical, sickening." We found 39 cases of Enginne* in OhioLINK and 870 in WorldCat.

(Meyyappan in Gin & Tonic & Passing Trains, from the artist's website.)