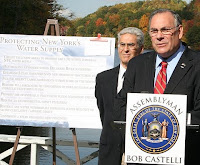 "Frack" sounds like a minced oath for what a lot of New Yorkers would like to tell the energy flacks to go do to themselves. In fact, the word fracking is short for "fracturing," the questionable means used to extract natural gas from underground shale reserves. Naturally, it's a far cry from natural. Hydraulic fracturing, or hydrofracking, uses close to 750 chemicals in the process (pains have been taken to hide exactly which chemicals those are) and some victims of the practice claim their water is now unpotable and in some cases even inflammable! This is the inflamed viewpoint of Gasland, the acclaimed 2010 documentary by Josh Fox. Natural gas deposits are located in many states (fracking currently occurs in 34 of them); the most extensive of these in New York State is the Marcellus Shale. We drilled down and dug up 14 cases of Natrual* in OhioLINK today and 173 in WorldCat.