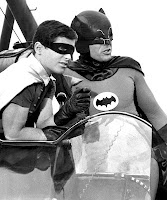 Taking a break from the Democratic convention on TV last night, I was checking out a classic sitcom when I suddenly heard Batman say: "If you can't trust the voters, whom can you trust?" Well, for starters, I'm not sure whether we can trust that "whom" there or not. Frankly, I've always found the matter of who versus whom, especially in certain contexts, a little confusing. It's not a problem when the word follows a preposition (in, for, to, etc.), but how about in a question like Batman's? Shouldn't that "whom" be "who"? Isn't that how most of us mere mortals would say it? After consulting Google, it looks like Batman (channeling his inner Bruce Wayne) is right; however, his way may be taking the highway. In fact, according to Henry Hitchings, author of The English Wars: A History of Proper English (2011), that war may already be lost. Hitchings, for whom many grammar "rules" are simply conventions, tells us that "whom seems to be receding." So whom shall we turn to for guidance? Can we convene a group of grammar geeks to come to our rescue? Consult the nearest copy of Who's Who for some names? Or should that be "Who's Whom?" Just kidding, I'm voting for "who," but you're free to vote for whomever you like. Seriously, though, here's how to remember it. If the word in question comes in the form of a question, just supply a plausible answer. If it's "I can trust him (or her)," it should be whom. There were 24 cases of Covention* in OhioLINK, and 544 in WorldCat.

(Photo of Adam West as Batman and Burt Ward as Robin, 1971, from Wikimedia Commons.)