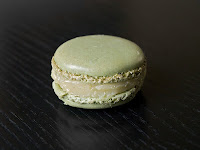 A new bakery has opened in Albany and I stopped in the other day to try my very first macaron—that's French for macaroon, sans the shredded coconut and the second letter o. But despite the name, it's really a different cookie altogether: two delicate meringue wafers surrounding a sweet, creamy filling. The delectable dainties are light as a feather and small, round, and shiny as a half-dollar coin, if rather more expensive ($2.50 a pop or $2.00 for five or more). The TC Bakery features these tiny treats, which look like colorful little dollhouse hamburgers or wee flying saucers; some say the best of the batch are those laced with the bakery's homemade caramel. Their classically trained chefs use top-notch ingredients like Plugrá butter and Valrhona chocolate and make their own flavored extracts. The macarons come in varieties such as pistachio; lemon; maple-walnut; lime and basil; orange; raspberry; "chocolate infinity"; salted caramel; pecan praline, Earl Grey and milk chocolate; the intriguing ube or "purple yam"; an equally enchanting "rose garden"; and (still in the works) vanilla and olive oil. They're notably difficult to make well, but if you're a home baker and want to give them a try, there are videos and recipes online. Back when I was younger, I used to have a problem with the spelling of ingredient, unsure if it ended in -ent or -ant. A friend handed me this helpful mnemonic: Ants like picnics, but you don't want to find them as ingredients in your food. Which is undoubtedly the case, notwithstanding the edible "chocolate-covered" kind. Although if anyone could make them taste très bon, it's the folks who brought you the macaron! Today's typo turns up twice in OhioLINK, and 44 times in WorldCat.