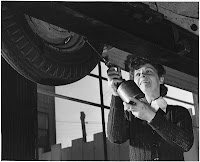 Most librarians I know are pretty happy with their jobs, but there was a time not too long ago when librarianship—along with teaching, nursing, waitressing, sales, and secretarial work—was one of the only occupations open or friendly to women. Therefore, there were very likely females in our profession who might have occasionally wished they were in another one. In any case, I love this photo, in which a former "salesgirl, librarian, and sixth-grade school teacher" is shown positively beaming as she works on a car during the WWII "Rosie the Riveter" days. I imagine there's something about standing when you're supposed to be sitting, making noise when you're used to being (and making others be) quiet, and getting your hands dirty instead of keeping them clean that really must have felt quite freeing. This pre-women's-lib "liberation," however, was very ephemeral since the moment our "boys" came back from the war, women were promptly returned to their traditional places, most of them ending up at home, not working for a paycheck. I was just visiting a library over in Hillsdale, New York, that had an assortment of free books available in the lobby. A first paperback printing of The Feminine Mystique caught my eye. It had originally sold for 75 cents and I was oddly gratified to see that the copy had a man's name written inside its tattered covers. Published in 1963, this feminist classic by Betty Friedan will mark its fiftieth anniversary next year. The Feminine Mystique was the first book of its type that I had ever read and therefore it made a huge impression on me; I read it toward the end of high school in the early 1970s. Friedan discusses "the problem that had no name" and gives plenty of examples of the kind of sexist propaganda being dispensed by so-called "women's magazines" during the postwar baby boom. I still remember the time I had to look up the word inferior in the dictionary after puzzling over an article in one of my mother's mags entitled: "Are Women Really the Inferior Sex?" Never has a definition felt more deflating. While there are certainly individuals and even entire cultures who still believe this, women as a rule are not considered inferior anymore, but are definitely in; you can read all about the history of the women's movement today in virtually any library in the country. Librarin* was found once in OhioLINK this morning, and 30 times in WorldCat.

(Photo by Ann Rosener, circa February 1943, from Wikimedia Commons.)