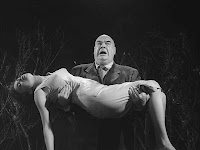 You probably wouldn't want to see the so-called "Super Swedish Angel" pictured on the right coming toward you in the middle of the night, but Tor Johnson was considered a very gentle giant by those who knew and loved him. That would include his fellow professional wrestlers (Tor topped out at around 400 pounds), along with various B-movie makers such as the infamously bad director Ed Wood and his eccentric cast and crew. (Actress Valda Hansen, who appeared with Johnson in Night of the Ghouls, said: "Tor was like a big sugar bun.") Tor Johnson (originally Johansson) was born in Sweden on October 19, 1903. Although he mostly played "movie monsters" and the like, Johnson also appeared in the W. C. Fields film Man on the Flying Trapeze, and had a small part in Carousel in 1956. There were two cases of today's typo in OhioLINK, and 56 in WorldCat. You can go a long way toward improving your own library's holdings by wrestling with this one in your own catalog.

(Tor Johnson as the dead Inspector Clay raised again by an alien race to fulfil their evil plans of conquering the Earth, in Ed Wood's cult movie Plan 9 from Outer Space, courtesy of Wikimedia Commons.)

"Torward" could have another meaning in Glastonbury, Somerset, where the Tor - a hill adjacent to the town - is a noted landmark. I have often walked in a Torward direction there myself.