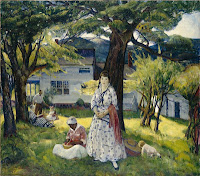 I was lucky to have grown up in a rambling, ramshackle, and rented three-story house on a sprawling piece of amazingly pretty property. Within view of the Hudson River (originally called the North River), it boasted almost every bucolic cliché in the book: a beautiful old barn that housed some donkeys for a while, a rickety chicken coop out behind it, and a free-ranging goat or two, although it wasn't really a working farm. There were apple trees and pear trees, a silver weeping willow, a large cluster of lilac bushes, a cunning little covered well, and an empty "cee-ment" pond—to mention only a few of its many charms. But the best part of all was the "Love Garden," a stone-walled world of wonder, with a trellised gate at one end, a tall tree swing at the other, a field of daffodils, and a carved marble bench on which we would sometimes sit and hold hands for the occasional game of "Wedding." (I mean, it was just too pretty not to.) Prettify your bibliographic property by correcting today's typo, which was found twice in OhioLINK and 37 times in WorldCat. You can try expanding your search to Propreties as well, but please take note of the following title (properly spelled or not?—I get pretty much the same number of hits on it spelled either way): A boke of the propreties of herbes called an herball, published around 1550.