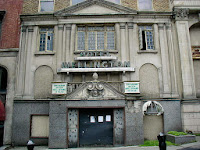 What goes up must come down, but I had never actually witnessed the demolition of a building before, until the razing of the Wellington Hotel Annex brought down the house, as it were, last weekend. Actually, I didn't really see it but I did hear the loud bang and feel the rumbling boom beneath my quietly treading feet. (This supposedly exciting, if all too brief, event had been slated to occur last Thursday, but would have wreaked havoc with state-worker parking and other weekday traffic, so on the eve of destruction it was moved to Saturday, a day I happened to be scheduled to work at the library. Sadly, we weren't able to see much from the seventh floor as a large tower blocked our view; however, a friend got some awesome still and video footage.) In any case, no one was too sad about the loss. The annex was a spectactularly ugly building, unlike the hotel itself, which was gutted several years ago, with the promise that its facade would be incorporated into the new convention center. The Wellington Hotel was an Albany landmark, the signature center of Wellington Row. It provided lodging for father-and-son governors Mario (former) and Andrew (current) Cuomo, along with other local politicos; it also housed many State University at Albany students up until the 1980s. Bob Dylan stayed there once. So did Albany-born news curmudgeon Andy Rooney. When the hotel was destroyed in 2009, hundreds of feral felines (many of them "tuxedo cats") had to be rescued, spayed, and resocialized for potential adoption. Some were even given cool-cat names, like "Mario Wellington." While cats have been known to occasionally wreck the homes of their owners, at least in part, this may have been one of the few times that the good people of Albany went and ruined theirs. (Although if they were as charming as those in Esther Averill's classic children's book The Hotel Cat, I would hope they ended up in better ones.) Today's typo was found once in OhioLINK, and 118 times in WorldCat. Demolish any of these still lingering in your own catalog and start building from there.
(State Street entrance to the Wellington Hotel in Albany, New York, prior to demolition, from Wikimedia Commons.)