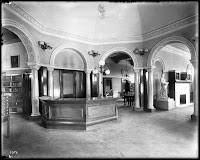 Librarians are famous for their endless acronyms, but I hate to see us fall prey to the attendant lure of absurd terminology as well. There was an article posted to AUTOCAT recently about the fledgling Florida Polytechnic University and its library, which for some reason has decided to go "bookless." He added: "There are way too many buzzwords in this article, in my opinion." To me, the worst one by far is the so-called "success desk." I commented on this to a colleague who has lately grown weary of the exigencies of reference work and he responded: "It has a nicer ring than the 'failure desk.'" A friend at a local college library tells the campus has an actual "Office of Student Success." (It's probably right around the corner from the "Department of Doing Well in Class.") A coworker mentions the Syracuse City School District's newly renamed "Office of Talent Management" (formerly called "Human Resources"), which puts me in mind of a cigar-chomping letch in a 1930s motion picture studio glancing meaningly at the casting couch. I'm not quite sure what's going on here (other than the apparently innate impulse to keep "upgrading" the names of things, otherwise known as pointless euphemism), but it makes me wonder if maybe we've been watching too many American Idol-type shows of late, in addition to drinking the "self-esteem" Kool-Aid being served at most of our schools these days. And speaking of kids, lunch, and out-of-control acronyms, I think my favorite comment of all comes from a classmate of my niece's, who once wryly observed (no pun intended) that "LGBT" sounds sorta like a sandwich. (Bacon, lettuce, and tomato with Green Goddess dressing, perhaps?) All kidding aside, and with reference to OhioLINK and WorldCat, today's typo was found 29 times in the former, and over 1100 times in the latter.
(Photograph of the reference desk area inside the Pomona Public Library, ca.1900. Situated near the front entrance, the reference desk, a semi-circular wooden desk, greets visitors. A lamp, several books, a pile of paper, a filing drawer, and a stamper are neatly placed on the desk. Surrounding the room are large arches, supported by columns, allowing access to many parts of the library. At left stand a bookshelf and a shelf for card catalogs. Several desks, chairs and bookshelves can be seen in the center room. At right stands a statue of a woman wearing a toga carrying a bag of fruits. From the California Historical Society Collection, 1860-1960, and Wikimedia Commons.)

"Human Resources" is already an upgrade of what was once called Personnel. Sometimes such buzzwords are time-savers; it is much quicker to say "downsizing" than "firing half the staff [sorry, human resources] and expecting the remaining half to do twice as much work".