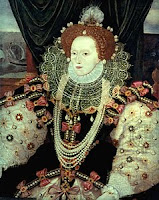 September 7th is the anniversary of the birth (in 1533) of Queen Elizabeth I of England.

Also known as the Virgin Queen, due to her refusal to take a husband, or Good Queen Bess, Elizabeth I ruled over England during a period that became known as the Elizabethan Age.

Elizabeth I had an almost cult-like following, with painters and poets depicting her as a variety of ancient mythological figures, including Diana (the virgin goddess of the moon), Astraea (goddess of jutice), and Gloriana (queen of the fairies).

She used her appearance as a political tool, displaying wealth and confidence through elaborate dresses and jewellery, as seen on the painting pictured here, attributed to George Gower. Elizabeth created her royal image with strict attention to detail and likely would not have made so galling an error as Elizabth*, a typo for both Elizabeth and Elizabethan.

(image from Britannica Online Encyclopedia)
Leanne Olson
Posted by librarytypos at 5:00 AM