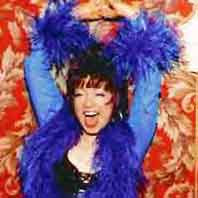 A popular pop music style in the 1970s, disco had its roots in both the black and gay communities. The word itself, of course, is short for discothèque, a portmanteau word coined around 1941, combining the forms disc (gramophone record) and bibliothèque (library). Disco had people dancing in their seats as well as in the streets. It also had its fair share of detractors, many of whom delighted in a certain disdain succinctly expressed in the rallying cry "Disco Sucks." There are three hits in OhioLINK for Musuc*, making it a "low probability" typo on the Ballard list, but one I just couldn't resist. In addition, we get 20 hits for Musc, about half of which are musical missteps, while most of the rest (I think) are the German medical abbreviation for muscles. And one is a misspelt Muse.

(Vicki Sue Robinson, who had a huge success with my all-time favorite disco song "Turn the Beat Around," from Brian Cormier's Blogtastic World!)