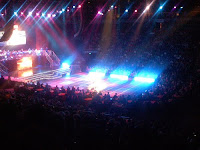 Last week yielded a bumper crop of politicians on national television–outside the news, that is. President Barack Obama and former President Bill Clinton each appeared on the Late Show with David Letterman, and while these two interviews were rather dignified affairs, the same really cannot be said of Tom DeLay’s performance on Dancing with the Stars. The costumed former Congressman could be seen hamming it up for the cameras and shaking his booty as he danced the cha-cha-cha with partner Cheryl Burke to the tune of “Wild Thing.”

If you want to keep tabs on DeLay’s progress, you can follow him on Twitter. If, however, you’re more concerned about your catalog’s performance, hunt down and correct instances of Nationa. This high-probability typo occurs 34 times in OhioLink English-language entries, and most of them are in transcribed fields.

("Dancing with the Stars" set, by Jeff Henshaw, from Flickr)