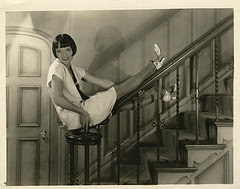 Intellegence gets 21 hits in OhioLINK and Intellegent gets three. If you truncate to Intelleg*, you'll get a lot more (55 to be exact), but some may not be typos. Most probably are, though, so if you know your foreign languages, feel free to try that too. Sine qua non silent screen star Louise Brooks was totally amazing from head to toe. Photographers often focused on her china-doll face and disarming flapper bob—Kenneth Tynan dubbed her "The Girl in the Black Helmet" in a 1979 New Yorker essay that lifted her out of latter-day obscurity—but her legs were equally arresting. Louise Brooks was both elegant and intelligent. She originally trained as a dancer and debuted with the Denishawn company in 1922, but was booted from the troupe two years later. She then began making movies but found Hollywood difficult (the feeling was mutual) and and finally found her true metier in Germany, working for director G.W. Pabst in such classic roles as Lulu in Pandora's Box. The more cerebral side of Brooks can be seen in the book of essays entitled Lulu in Hollywood, which she published in 1982 at the age of 76.

(Portrait of Louise Brooks by Otto Dyar, from Flickr.)