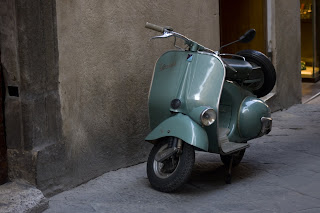 It's probably an overstatement to call this one the universal typo, but Unives* turns up 273 times in OhioLINK and most assuredly will in most other databases also. No matter what school you may attend or which languages you speak, university and its relatives invariably include an R. Hopefully, you won't have to write it out a hundred times or more in order to erase today's typo from your own catalog.

(Built for one, this photo of a "fender light Vespa" was taken in 1952, from Wikimedia Commons.)