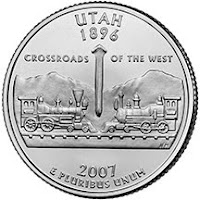 Did you think of the tree? While it’s true that Box Elder is indeed a type of tree native to the central and eastern United States, it’s also a county in Utah. There, on May 10, 1869 at Promontory Summit, the nation’s first transcontinental railroad was completed. A joint project by the Central Pacific and Union Pacific Railroads encompassing 1,800 miles of track, it took roughly six and a half years to build. Since 1957, this momentous achievement has been commemorated at the Golden Spike National Historic Site, where there are reenactments of the original ceremony joining the two rail lines with (you guessed it) a golden spike. Also on display are replicas of Central Pacific's Jupiter and Union Pacific's No. 119 engines.

Box Edler is a typo of low probability with 5 entries in the OhioLink catalog. All occur in title fields for quadrangle maps of Box Elder County.