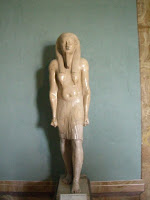 Have you ever wanted to see a man in a skirt, with long hair and pendulous breasts? Well, this should make you Hapi. Also spelled Hapy, the Egyptian "genius of fecundity" actually looks a little ticked off about the whole thing, but perhaps he's carrying reed seeds in his balled-up fists. Regarded as the god of the River Nile, or more specifically, the annual flooding of same, his name translates to "Running One." He was also called "Lord of the Fishes and Birds of the Marshes" or "Lord of the River Bringing Vegetation." A pursuit of Hapiness in OhioLINK yielded 14 records, including three where the potential typo was qualified with a [sic], plus two containing possible "antiquated" spellings, which may or may not appear that way on the original. Happily, though, you won't have to lift any heavy clay tablets or unroll a scroll of dusty papyrus in order to find out.

(Statue of the god Hapi, 100-200 A.D., housed in the Vatican's Gregorian Egyptian Museum, from Wikimedia Commons.)