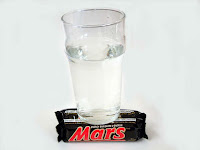 The exact origins of April Fools’ Day are unknown, but there’s been plenty of speculation. One of the most popular theories is the French origin: in 1582, the adoption of the Gregorian calendar moved New Year’s Day from March 25th to January 1st. Those who continued to celebrate the end of the new year’s week on April 1st were called fools--or other insults. In France, the celebration of April Fools’ Day involves calling your victim poisson d’avril (“April fish”) and taping a paper fish to his or her back.

One of my favourite April Fools’ jokes was quite astronomical (not astromomical), perpetrated by the National Aeronautics and Space Administration. In 2005, NASA posted a story on their website announcing that they had pictures of water on Mars! The photos turned out to be not of water on the red planet, but a glass of water balanced on a Mars chocolate bar, pictured above.

Also watch out for Astromon*, which we blogged about last year.

(Photo of water on Mars from NASA's Astronomy Picture of the Day)
Posted by librarytypos at 5:00 AM