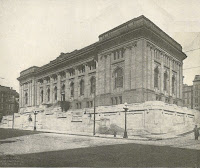 No wordplay today, just a simple plea: Support your local library, lobby for state library funding, and promote the role of libraries in the nation's economic recovery. If none of that works, you could try giving NATO a call. (Okay, one pun.) It's National Library Week and, while it might not seem like there's a whole lot to celebrate these days, maybe it's a good time to step back and take a look at where we're at. To reassess and reconsider, figure out where we need to go and how we're going to get there. In a tight economy, which will it be? Books or bytes? Hours or towers? Bricks and mortar or WiFi and broadband? Are libraries becoming obsolete, or are they our only hope for the future? (I'm watching That Touch of Mink on TCM as I write this and just heard John Fiedler say to Barbara Colletine: "You librarians live it up pretty good!" Well, perhaps we should start acting like it.) There are 47 cases of Natonal* in the OhioLINK database, but by fixing this typo locally, we improve access to the national debate on such critical issues.