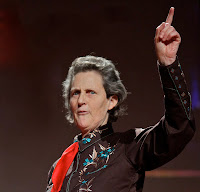 Today is the birthday of Temple Grandin, which I notice makes her astrological sign Virgo. Virgos are known for being very precise and detail-oriented, which are often elements found in the extreme in people with autism or Asperger syndrome. A high-functioning autistic, Grandin is a doctor of animal science and a professor at Colorado State University. She is also a consultant to the livestock industry on animal behavior. She designed the therapeutic and stress-relieving "hug machine" in 1965 after observing how confinement in a squeeze chute would calm cattle that were headed to slaughter, and recalling how similar "deep pressure stimulation" had had a similar effect on her own hypersensitivity. I first became aware of her work in the short documentary film, "Stairway to Heaven," the first in the excellent Errol Morris series First Person. Though she has had a remarkable life and career, its pinnacle was probably reached in 2010 when she became the subject of the award-winning HBO film Temple Grandin, and was also named one of Time magazine's 100 most influential people in the world. We found 23 cases of Austis* in OhioLINK, and 220 in WorldCat.

(Temple Grandin at the 2010 TED conference, from Wikimedia Commons.)