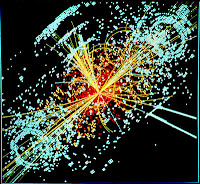 Earlier this summer, the news was full of reports that scientists working at the Large Hadron Collider facility in Switzerland had (perhaps) finally discovered the Higgs boson. This elusive particle is also dubbed the “God Particle” because the field it generates is thought to give things in the universe their mass.

It surely was no coincidence that soon thereafter, the Urban Dictionary word of the day was “Oh My God Particle.” Not nearly so weighty in import, it’s defined as “the gene in a person’s DNA that causes him or her to constantly text ‘OMG!’”

Paticl* is a typo of low probability. You can discover two instances of it in OhioLINK.

It's ironic that a blog entry about typos should itself contain a glaring example of one. The particle is the Higgs boson. A bosun (boatswain) is a ship's officer.

Thanks for writing. Your correction is much appreciated. We've edited the post now.