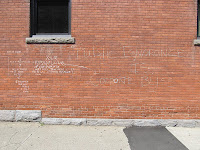 A buddy of mine came upon a bricks-and-mortar spelling debate the other day on a stroll through the streets of Great Barrington, Mass. A disaffected graffiti artist had scribbled the words "Public ignorance is corporte bliss" on the side of a building, to which a second person replied: "Your misspelling of corporate weighs towards public ignorance." Another pedantic pedestrian then crossed out one of the s's in the word misspelling and wrote, "Also mispelled." Whereupon a fourth one put it back in, pointing out: "No, actually they were rite." I'm not sure where all these people got all that chalk, but I suppose that's a story for another time. (I suspect the first person found some there and left it on the windowsill, until the owner of the building wised up and threw it out.) This editorial exchange eventually wound down when an exasperated passerby stated that they had dropped out of school and simply didn't care, and quickly devolved into what I assume was the final postscript, which somehow seems to capture the relative absurdity of it all: "Brooklyn sucks." The little arrows pointing every which way also afford a nice if slightly ironic touch, making it look like an outdoor office staff meeting complete with mind-numbing flow chart. In any case, public ignorance is corporate bliss, and the handwriting is certainly on the wall. Causing it to be, at least momentarily, a bit more compelling than a lot of misspelled comments tossed off on yet another political blog. Today's typo was seen 74 times in OhioLINK and 1,115 times in WorldCat.

Carol Reid
Posted by librarytypos at 11:10 AM