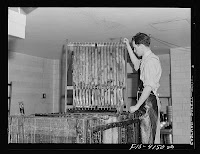 Today’s blog entry should make you smile.  In much the same way that digitization has rendered microfilm largely obsolete, the typo Mocrofirm has apparently become extinct in library catalogs.  There are currently no entries for what was once a moderate-probability error in either the OhioLINK or WorldCat databases.  However, even though we're not so lucky with other variants that also appear on the Ballard list (some of which have been featured in past entries), we’ll leave those for another day.