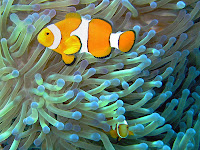 Uh oh, it sounds like somebody needs a basic biology lesson.  This past Sunday, Representative Todd Akin of Missouri told KTVI-TV in St. Louis that in cases of “legitimate rape, the female body has ways to try to shut that whole thing down.” Because his understanding from doctors is that resulting pregnancies are “really rare,” Mr. Akin believes abortion laws need not contain an exception for rape victims.  Really?!?!?

These comments garnered the aspiring senator loads of attention, although not the type he might have wished for.  The backpedaling has been rapid, but your chances of encountering the low-probability typo bilogy might be higher than his odds for getting elected right now.  There are four instances of this error in the OhioLINK database.

(Symbiosis between clownfish and sea anemone, one of the marvels of biology, from Wikimedia Commons)