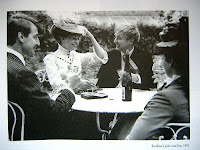 According to The Columbia Guide to Standard American English, “ordinal numbers are adjectival forms, ending in -st, -nd, -rd, -th, setting the named item “in order”. To a grade-schooler or a student learning English as a second language, this seemingly arbitrary system could be quite confusing. “Miss Othmar, why can’t the runner come in 2rd?” While you’re reminiscing about your grade school grammar report cards, here’s some more food for thought: the Japanese language has a counting system based on the shape of an object.

3nd appears 14 times in OhioLINK, and was in high probability at the time it was added to the Ballard List. 3nd also turns up 289 keyword search hits in WorldCat. A majority of these errors occur in subject headings for international and overseas conferences. In some cases where the error appears in the title, the astute catalogers have transcribed it as it appeared on the chief source of information, as evidenced by the use of the Latin sic.