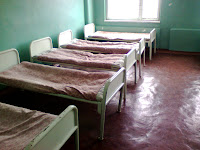 There are 16 cases of Direcot* in OhioLINK, directing us to take action on a "high probability" typo. (Truncating to Direco*, in fact, brings up 35, only one of which is not a misspelling: direcommendations, part of a URL to a website concerning deposit insurance.) Staffing and funding shortages are one ongoing reason for hospital vacancies in the Ukraine, but another situation is proving even more dire. The Council of Europe recently issued a report detailing the mysterious disappearance of newborns while still in the hospital. Mothers were told that their babies had been stillborn, but it's suspected that in many cases the infants were sold into an illegal adoption trade. Subsequently, there have been calls for opening up international adoptions, putting policies in place to register newborns and allow parents to see their babies immediately after birth (whether dead or alive), and enforcing the laws against human trafficking.

(Hospital beds in an empty chamber in Kharkov, Ukraine, by Канопус Киля, 2008, from Wikimedia Commons.)