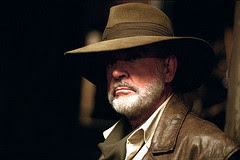 Author H. Rider Haggard (1856-1925) penned several novels in the fantasy/adventure/science fiction genre, but he is best known for the adventures of his swashbuckling hero, Allan Quatermain. Haggard’s contemporaries accused him of contributing to the decline of literature; modern critics believe that his exotic, action-packed novels appealed to the secret fantasies of prim and proper Victorians.

There have been several television and film adaptations of Haggard’s Quatermain novels, such as a recent 2008 straight-to-video movie, a 2004 TV movie starring Patrick Swayze, and a couple of ‘80s B-movies featuring Richard Chamberlain and Sharon Stone. Sean Connery has portrayed our famously and frequently misspelled title character in the film adaptation of Alan Moore’s graphic novel, The League of Extraordinary Gentlemen.