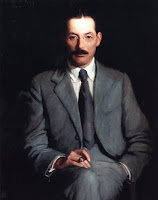 I don't want to depress you, but there are 13 cases of Sucid* in OhioLINK today. Four of them are references to a place named Sucidava (historical site in Romania) and one is for a song possibly called "Sucide" by Suzi Quatro (I'm actually not sure whether this is a typo or a type of pun based on the artist's name, but I suspect it's the former). One also suspects that the buttoned-up, but somewhat sardonic-looking, Edwin Arlington Robinson, who died on this date in 1935, was no friend to typographical errors. In the carefully crafted poem "Richard Cory" (which some critics believe relates to the death of his brother Herman from a drug overdose) we're told:

Whenever Richard Cory went down town,
We people on the pavement looked at him:
He was a gentleman from sole to crown,
Clean favored, and imperially slim.

And he was rich—yes, richer than a king,
And admirably schooled in every grace:
In fine, we thought that he was everything
To make us wish that we were in his place.

So on we worked, and waited for the light,
And went without the meat, and cursed the bread;
And Richard Cory, one calm summer night,
Went home and put a bullet through his head.