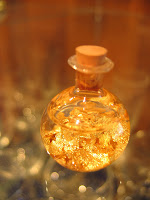 The ancient study of alchemy is concerned with making the Sorcerer’s Stone, a legendary substance with astonishing powers. The stone will transform any metal into pure gold. It also produces the Elixir of Life, which will make the drinker immortal.

In the very first Harry Potter book, we find our young hero trying to adapt to life in a world he never knew existed, at Hogwarts School of Witchcraft and Wizardry. As if that weren’t enough, in his spare time he has to prevent You-Know-Who (even if Harry doesn’t) from getting his hands on the magical Sorcerer’s Stone and thereby attaining the Elixir of Life.

Elixer is a typo of moderate probability on the Ballard list and has 14 entries in the OhioLINK catalog. Alas, correcting such errors will not make you immortal!

(“Gold” by bubor, from the Stock.XCHNG photo site)