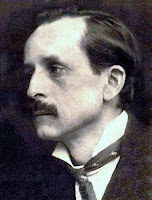 "Peter Pan Syndrome" is what some people call it when grown men go on forever acting like little boys. It can include fear of commitment, fear of the household chores, fear of coming home on time, and fear of the bath. (It's an old story, but somehow it's a lot cuter when J.M. Barrie tells it.) In the 1911 children's classic Peter Pan—firstly and more feministly entitled Peter and Wendy—Peter refuses to age appropriately and join the ranks of the synthetic drones otherwise known as adults. To many of Barrie's contemporaries, it was "A Sin to Tell a Lie" and Peter Pan regarded growing up as a most egregious one. But he wasn't the only one in the book who felt that way, at least a little bit. Our tale begins with Wendy and her mother in the garden, where the girl hears her wistfully sigh: "Oh, why can't you remain like this for ever!" "This," adds the author, "was all that passed between them on the subject, but henceforth Wendy knew that she must grow up. You always know after you are two. Two is the beginning of the end." There are 17 cases of Sydrom* in OhioLINK, 12 of Symdrom*, and four of Syndron*. Peter gets top billing here, but it's been said that Barrie actually invented the name of his heroine (it appears a rather saccharine-seeming child who'd formed an attachment to the writer once referred to him as her "fwendy" or "fwendy-wendy") and it's certain that he popularized it, although there's evidence the name had been in some use prior to that time.