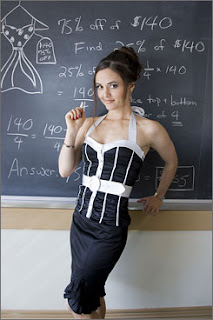 I was coming back from lunch a while ago when one of the entries in a children's Martin Luther King exhibit caught my eye. It was supposed to indicate that ATTITUDE leads to ACTIONS, but something about it seemed a little off. I figured it was just the big block letters that appeared to be bleeding, but when I turned back to take a second look, I saw what it was: the artist had spelled the word "Additudes." There are only two cases of Additud* in OhioLINK, but 19 in WorldCat, two of which are for the online resource ADDitude: a magazine for people with attention deficit disorder. Of the remaining 17, one reads: TTC 1988 public attitude survey: additudinal [i.e. attitudinal] and ridership analysis and another one reads: A study of media additudes [sic] toward the holocaust. This typo is probably due mainly to the fact that the word attitude is pronounced with more of a D than a T sound, although the "attention deficit disorder" theory may also have some merit.

(Danica McKellar, aka Winnie Cooper from The Wonder Years, a definite adder with attitude, and one of Wired Magazine's "Sexiest Geeks of the Year" for 2007.)